The Pakistani power sector has braved waves of load shedding and costly electricity since 2008. However, with reform, via policy-making, the menace of load shedding has been greatly reduced. Now that power availability is not a pressing concern, future endeavors have shifted to finding means to reduce the national average tariff. Within such an environment Alternate and Renewable Energy Policy 2019 (AREP-19) has been launched by the Government of Pakistan (GoP). Though the policy is still under formulation, a second draft of the policy  has betrayed a number of important attributes. With the ever-increasing importance of renewable energy, a detailed comparison of ARE-2019 in relation to previous policy[1] and the general needs of the sector, is overdue. However, before comparing the two policies it is important to review the essence of REP-06.

REP-06 was a pioneering policy for Renewable Energy (RE) that paved the way for regulatory and legal recognition to non-Hydel based renewable energy policy. Since this was the first forage of GoP towards RE, the policy was expected to prioritize execution over perfection. The policy covered three types of technologies namely: Small Hydel (<50MW), Solar and Wind Energy Generation. The Generation-tariff-determination mechanism was borrowed from the then-new Power Generation Policy 2002. Furthermore, in order to infuse dynamism in the sector, the policy gave special concessions to projects that achieved their financial close before 2012. These projects were awarded on cost-plus or upfront tariff regimes.

Currently more than a hundred LOI holders, that were yet to be given further processing, will be further brought towards commercial operations.  As these projects come online, the impact of this policy will be heard with a positive echo in the annals of history.

Though RE-06 got the ball rolling, in terms of Non-Hydel based Renewable energy generation, however the policy still had a number of shortcomings. First, the policy covered only three technologies. This led to the stultification of other Non-hydel RE sources. Furthermore, the policy was myopic when it came to adapting the grid to Variable Renewable Energy. This want of adaptability came in the form of gross capacity shortages as well as reliability issues. As a result, a lot of potential energy was never evacuated. Furthermore, the policy showed no interest in hybridization.  Moreover, the policy was only focused on increasing the capacity rather than decreasing the price basket of Power Generation.

AREP-2019 personifies a mature renewable energy generation policy. For starters, the policy is dynamic in that it covers all technologies (except hydel). In an attempt to make the electricity more affordable a number of prudent measures have been rolled out. First, Capacity Bidding will replace the up-front and cost-plus regimes as far as proven RE technologies are concerned. Such a structure will incentivize competitive tariff reduction. Furthermore, the “take or pay”[2] basis of pricing will only exist till the maturity of tenor on debt for any given project. Afterwards, the contract would shift “take and pay”[3] basis. This measure will reduce tariff prices in two ways. First it will stimulate creation of long-term debt market within the renewable energy sector. Second, it will pass the intermittency/capacity risk onto the producer[4]. AREP-2019 does not stop there. Projects under this policy can be launched to either meet the capacity needs or to reduce the average price basket (displacement-based projects). Displacement based justification for projects will ensure fast leveraging of any innovations in proven technologies that are already competitive.

The nature of Bids placed by government will further enhance the efficiency of the power sector. Bids will be placed for RE – Generation sites that are optimally placed to utilize the current transmission network. This would reduce the overall cost of electricity generation by reducing need for laying new transmission lines.  Such a feature breaks previous practice where the sponsors[5] got to choose the site and NTDC had to built transmission lines to site.

Apart from making the sector, more efficient; measures have been taken to make the decision making in the sector more efficient and rational. For starters, the policy has introduced auto-indexation. This would help IPPs while at the same time reduce work load for NERPA. Overall, it will reduce the cost of doing business. Furthermore, the policy will take Guidance from NEPRA’s approved Integrated Generation Capacity Expansion Plan (IGCEP). This will ensure that the nation does not fall into another “capacity trap”. Furthermore, the new policy places relevant deadlines on the stakeholders to complete their preparation by June 30th of every year to ensure regular biddings. In addition, the policy has also set targets against which it can be judged. AREP-2019 aims to place bids for RE generation every year, with the goal of procuring 20% of Pakistan’s electricity needs by 2025 and 30% of Pakistan’s electricity needs by 2030 via Variable RE sources.

After catering for affordability and efficiency, the policy also focused on being inclusive. Under the policy, project selection will happen on the basis of a steering committee that will include representation from various provinces as well various bodies such as CPPA(G) and NTDC. Of course, such inclusiveness will promote accountability and communication between various stakeholders. AREP-2019 also allowed room for new technologies in the form unsolicited bids for new technologies. Furthermore, the policy has promoted new approaches such as Hybridization and Industrial Scale Batteries[6]. Moreover, the Policy has introduced, for the first time in history of Power Policies within Pakistan, the concept of promoting manufacturing of components used in Renewable Generation projects. Doing so would reduce the Foreign Component of Tariff in the long-run.

However, like all polices AREP also holds potential for improvement. Before the discussion can delve into the specific issues, it is important to revisit the fact that AREP is not a complete and independent power policy. Rather it is expected to be subservient the National Power Policy in the Grand Scheme of things. A simplified version of the legislative hierarchy has been presented in Figure 1. 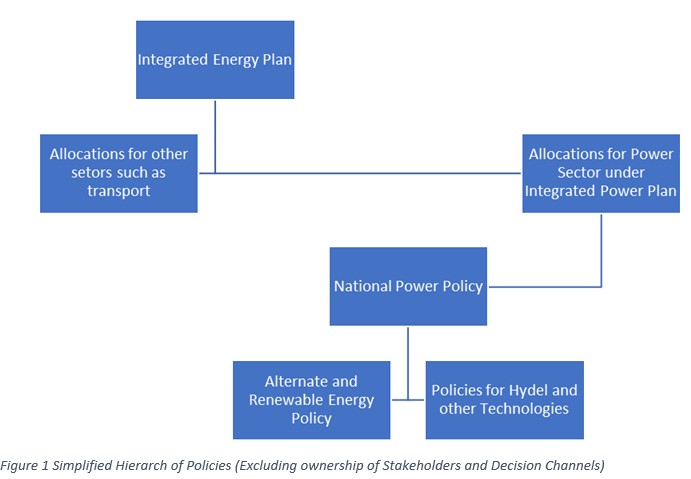 With that in mind, the policy still has a lot of potential in terms of improvement and reorientation. First of all, the policy has failed to completely address the biggest recent issue facing the renewable energy i.e. problem of power evacuation. The transmission lines used for power evacuation tend to suffer from capacity and reliability issues. According to the NEPRA State of Industry Report 2018 298.9 MW of wind power is curtailed during high wind period[7].

In order to solve the capacity problem in the long run, the policy has decided to consider IGCEP in placing bids, however no concrete measure for financial viability of new transmission projects within NTDC has been constructed. With a constrained national transmission body, the policy has also waivered at considering private transmission laying companies to circumvent issues in financial capability. Similar solutions to address the issues of reliability improvements within transmission have also been ignored. These include bids for battery-based stabilization.

Apart from transmission, a number of other opportunities have also been squandered. These include the opportunity to make State Bank of Pakistan part of the proposed inclusive steering committee. Doing so would allow the sector to synchronize with the Current Account needs of the country. In return, the sector would receive more keen interest of the financial regulator. Such attention can potentially translate into lower financing costs in the long-run through initiation of special SOPs for processing RE related projects.

The policy also displayed apathy towards development of a carbon credit market. Considering Pakistan is a signatory of the Kyoto Protocol, it is incumbent on the government to reward carbon trading. However, AREP 2019 gave no new significant improvements over the old policy when it came to the development of the carbon market. Lastly, AREP -2019 has spurned the idea of implementing of SAPs based auto calculations for settlement of figures such as NPMV[8]. Automation of such processes would not only streamline operations within the current market but also pave the way for future electricity markets and AI based tools[9].

The RE-2006 policy did its job by introducing Renewable energy into the country. However, like all policies, it left some gaps that were expected to be filled by future policies. AREP – 2019 is expected to plug many of these gaps. However as of the second draft of the policy, there remain many shortcomings that need to be addressed in order to ensure that RE in Pakistan achieves its full potential.  As the policy goes in front of the Council of Common Interests, it is hoped that many of these issues will be discussed.

[2] Guarantee of minimum payment to the power producer.

[4] After expiration of the tenor.

[5] Potential IPP that wants to set up a RE generation facility.

[6] For storage and not grid stabilization.

[7] Currently Wind power in Pakistan consists of investments in two wind clusters, namely Jhimpir Cluster and Gharo Cluster. Within Jhimpir there is the new and old cluster.

[9] An AI’s utility increases exponentially in relation to the amount of data fed into the program.